I lived on Osco Parkway for the first twelve years of my life. We’d live in two more houses in Georgia before moving to Oklahoma. I called two duplexes and a sprawling ranch house home in the four years I lived in there. By the time I left Dallas, I had lived in four different apartments. I had three separate addresses my first year in Jackson, Tennessee. That’s thirteen addresses before my twenty-fifth birthday. However difficult some of these moves were, they each marked new seasons of life and anticipated the next one. 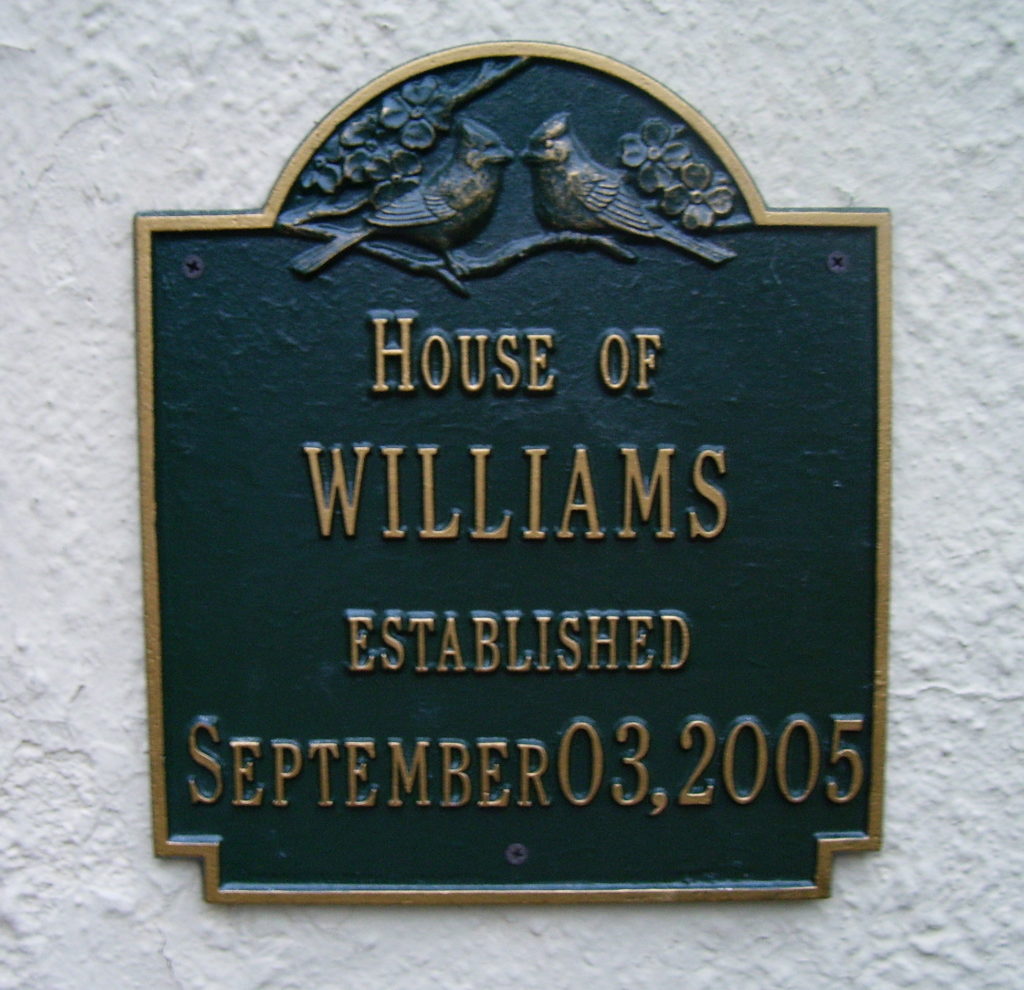 My fifteenth address was my first mortgage and the gateway to adulthood. Actually, it was more of a gateway to stability. I had never lived in one house for as long as I had lived on Osco Parkway, so purchasing my own home came with a sense of permanence. For the first time, home was mine. I love being home. Home is a shelter from insecurity. Home is a place that yields to your will. The world outside is unstable. It changes every day. Home doesn’t change unless you want it to. You have power over furniture arrangements, paint colors, and the direction the toilet paper hangs. Things don’t have to be the way everyone else says they do at home. Well, that is until you get married.

When I bought the Westmoreland house in January of 2005, I had given up on ever being married. I was in my late twenties and there were no prospects in my sight so buying an old fixer-upper seemed like a fun project. Janie and I started dating that April, though, and I was in a rush to get the place livable. I may joke about being in control of my home until we got married in September, but the truth is, it wasn’t a home until then. I could have lived in a renovation mess while I took my time making things perfect, but she came along and that wasn’t an option. Jackson had become my home. I was a decade into adulthood and had finally found a place where I felt I belonged. I had been given something others long for. But I had no idea what home could be when I carried my bride (or tried to) across the threshold of that money pit. Home was my family when we lived together on Osco Parkway. When my family crumbled, I longed for it. Home had become a church family in Jackson, but now home was becoming my own family again. Our home grew. Dillon was born two years later, followed by his Irish Twin brother, Isaac, 11.5 months later. Our little two-bedroom bungalow was getting cramped.

My sixteenth address was a palace. The agent had told us that while people were losing money on homes all across the country, our little fixer-upper was worth enough to put a down payment on something a little bigger. Janie was pregnant with Sammy so we started looking for a 3 bedroom upgrade. We loved our neighborhood, but it was filled with older homes that required more upkeep than we could afford. We needed a newer home in a good neighborhood so we joined the white flight northward. I call the Weatheridge house a palace because it was about 2,600 square feet, had 4 bedrooms (two master suites), 2 full baths, 2 half baths, a bonus room, an office, a detached garage, and sat on an acre fenced-in lot. Only in Jackson, Tennessee could a single-income, self-employed graphic designer be able to afford such luxury. Sammy was born a few months after we moved in and Ellis came along a few years later. We filled that house with family. That house was our home. We wept through two miscarriages in that house. We learned how to ride bikes in that home. We had cookouts and parties, hosted Bible studies and conducted premarital counseling in that home. We played baseball and soccer in that yard. It was not only my dream home, it was our kids’ only home. Their earliest memories occurred in that home. For them, what else could home be if it was not that house? This is why it hurts to remember Dillon’s elation at my acceptance to Beeson. He had no idea that his concept of home was about to be shaken.

I had been antsy for a while. I was in my late thirties and was growing increasingly discontent with my career. I had always thought careers were things people planned on and worked toward. I had neither planned on nor worked toward being a graphic designer and yet there I was. I began 2016 with a sense of impending crisis. I joked with Janie about my premature mid-life crisis, but there was a lot of truth to it. Some people just chuckled at it, but it really bothered me. I don’t think I was simply discontent with a career, but an unfulfilled calling. In the preceding two years, much of my social structure had crumbled. It was getting more difficult to endure discontentment because there were fewer reasons to. My home was not really home to me anymore. The town itself was a painful reminder of brokenness. Why was I still there?

This must sound incredibly selfish. Why would I uproot my family’s home just because it was no longer my home? This question paralyzed me for a long time. However, there comes a point when your own unhappiness becomes the burden of others. I was miserable. Depressed. I grew cynical and embittered. I felt that I had been abandoned and left high and dry. I was angry and resented the happiness of others. I was frustrated and wasn’t handling it in the healthiest way. I don’t want to paint too bleak a picture here. Life was going on as it had before, but your family can tell when you start to yield to “quiet desperation.” This is what I mean by unhealthy. I was faced with a decision. Either I could resort to martyr myself so my family can stay cozy in Jackson, or I could heed the call. I’ve seen men who opt for the former and none of their families appreciate it down the road. I had to try for the latter. I had to heed the call, whatever the cost.

It must have been some time that year, perhaps in the summer, I was cleaning out the garage of our little palace when Janie joined me. I had been thinking about our comfortable life with all of our possessions in our nice neighborhood with our four happy kids. It certainly wasn’t perfect. We were in debt, living paycheck to paycheck. I may have been discontent, but it was a good middle-class life. In addition to my mid-life crisis, I had been asking some deep questions about what it means to be a disciple of Jesus. I had worked hard all of these years to pay bills and make sure to provide for my family. Yet, I never had any money to give away; I couldn’t help others in need. Why? Did we spend all of our money on ourselves? Were we trying to keep up with the Jones’? Was gospel ministry to be relegated to my own socio-economic class?

I paused for a moment with the broom in my hand, “I just want my discipleship to cost me,” I told Janie. In response to the zeal of a would-be follower, Jesus once said:

“Foxes have holes and birds of the air have nests, but the Son of Man has nowhere to lay his head” (Matt. 8:20).

Jesus did not have a home. Anyone who follows Jesus must understand that doing so does not guarantee a home. I think what I most desire in life is a home. Not just a house, but the kind of home I had in Jackson. The kind of home I had at Christ Community Church. The kind of home I have in Janie. The home we’ve made with our children. To that would-be disciple, Jesus was asking, “Are you sure you’re willing to follow me? You just might have to give up everything.”

“Get out of your country, from your family and from your father’s house to a land that I will show you” (Gen. 12:1).

Abraham was called from his home. It wasn’t taken from him. He had to decide to voluntarily leave it behind. No one would do such a thing unless there was a promise attached to it. The goldrush promised gold to those who ventured west. The housing crisis promised prosperity to risky lenders. God promised blessing, children, land, and protection to Abraham. Jesus all-but-promised homelessness to his disciples. Here I was, sweeping the garage of a palace––thankful, but discontent.

We mostly hear the grand stories about risks people make on faith. I think the way God works with most of us, though, is through a long and slow process that brings us to make a decision like Abraham did. He was under no threat or compulsion. Neither was I when I stood in the garage that day or when I submitted an application to Beeson or when I signed the deed over at closing. Fear of loss was not really a concern. Instead, I see a desire. A willingness to follow. It isn’t that I opt for a blissful ignorance or naiveté as if I plan to build a tower without counting the cost. I’ve known for a long time that discipleship might cost me everything. At some point, though, you actually realize that what discipleship costs you really is worthless compared to what you gain. Our palace is a possession, a thing. I am thankful for it when I had it, but I can only hold onto it loosely. I have to be willing to let it go.

As it turns out, selling our palace was not as tough for God as I thought it would be. Three weeks after I was accepted into Beeson we had a For Sale sign in the yard. We had a few showings the first week and by the third week, we had a contract. Between the two of us, Janie and I would make three trips to Birmingham to find a rental house before Christmas. We signed a lease on December 30th. Somehow, over the next three weeks, we got packed up and moved to Birmingham on January 14, 2017. It was almost 15 years before to the day that I moved to Jackson.

Another move. Another address. Another town and house. We wove through backroads of a Birmingham suburb that day, unprepared for the climb upward to the next season of life. We crested the hill of our new neighborhood, which we had only visited on Google maps. We tilted our heads back and our jaws dropped. And our hearts sank. We were…home.