2017 ended and with it, so did my tenure in the magazine business. I began working at Christ the King Anglican Church in January 2018. I also took the first of my elective classes for the Anglican certificate during Beeson’s January term: Anglican Liturgics. This was a class I would have wanted to take regardless of whether I became Anglican or not. It gave me valuable insight into the liturgical practices we had instated at Christ Community Church many years ago as well as new insights I had never thought about. We performed mock baptisms (with baby dolls) and Eucharistic celebrations. I was getting an invaluable education in church history and tradition.

In many ways, I was picking up where I left off prior to CCC’s split. However, I did this without a clear conscience. I had come a long way, but I had continued to harbor a fair amount of bitterness toward many of my friends who had become Anglican. Of course, Anglicanism was never the problem. I had already assumed that would be where I’d end up. I needed to forgive. 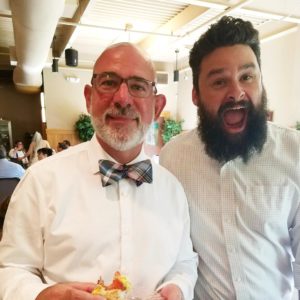 Forgiveness is a choice. It’s a choice you can’t make until you are ready. Perhaps I’m wrong, but I think you’re only ready to forgive once the anger subsides. Only then does a choice lie in front of you. You can continue to pick at the old wound, letting yourself revisit your anger, or you can write off the debt owed as a loss. What tipped the scale in the direction of forgiveness for me was fatigue. I had grown tired of being angry. A few attempts at reconciliation had occurred and I felt responsible for brokering peace between those who left and those who stayed. I grew tired of carrying that responsibility so I laid it down. I made peace with a friend by resigning to the fact that I didn’t know all of the factors that led to the hurt. I felt something was owed to me. I felt something was owed others, something was owed the church. But I couldn’t let life in Birmingham become contingent on the debt being paid, so I forgave it. Bankruptcy. Nothing owed. I’m no longer looking for apologies. Many relationships have changed over the last few years and they may never be what they once were. Hopefully, we’re all becoming better men so relationships may end up improving if they continue at all. However, I know not all relationships can stay intact. Like Osco Parkway, Westmoreland, and Weatheridge, they aren’t as permanent as I’d like. My counseling professor says that we die a thousand tiny deaths a day. But this is the whole reason we have a gospel. Loss and death hurt because they are antithetical to who and what we are. We are made for life, not loss. Forgiveness has led to healing for me, and I am thankful for that, but I’m holding out for restoration, reconciliation, resurrection. Whatever loss I have experienced, as sad as it can be, cannot compare to the promise of the resurrected life. I’m thankful for my friends, my homes, and my churches, but they are in need of as much repair as I am. We can never enjoy such things until all have been renewed, for…

…now we see in a mirror dimly, but then face to face. Now I know in part; then I shall know fully, even as I have been fully known. (1 Corinthians 13:12) 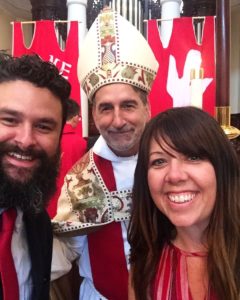 Becoming Anglican has felt less like betrayal, too. While some back home are not exactly thrilled about my decision, I sense genuine good will. That doesn’t mean there isn’t a lot of explaining to do. Janie and I were confirmed into the Anglican Church on Pentecost Sunday. We took a selfie with Archbishop Foley Beach that morning and it ended up floating around social media. We had to field a lot of questions over the next few days. I don’t really know the answer to a lot of them, but I’m learning more every day. It is an interesting time in history for Anglicans. It is an interesting time in history for the whole church, for that matter. This issue of sexual ethics has caused a crisis in the communion (Anglican-speak for global denomination). The Western provinces (Europe and North America) have taken an unbiblical stand on issues of same-sex marriage and homosexuality, which really is a question of biblical authority. The province I’m in–the Anglican Church in North America (ACNA)–is part of the Global Anglican Future Conference (GAFCON), which just held its third convention in Jerusalem. This group represents 2/3 of Anglicans across the globe and is standing for biblical authority on these issues. It is a very interesting time indeed.

The road to seminary has been a long and wild ride. The purpose of these posts has really been to share with my family and friends why we’re doing what we’re doing. I am writing this retrospective in July of 2018. I’ve only been at Beeson for three semesters and am gearing up to start my fourth. There is plenty more to come. The reality of seminary is that I don’t have time for writing anything but papers during the semesters, but I hope to start a similar series explaining Anglicanism a bit more. It helps me to think through things and reflects a bit while informing those I love of a major part of my future. Thank you for reading these posts. Stay tuned for more.

2 thoughts on “Road to Seminary | Retrospective”